According to the Sumerian Tablets Gaga was a moon of Saturn disturbed by Nibiru and sent into its own orbit around Solaris becoming known as Pluto.

When someone is ‘gaga’ they are deemed to be ‘out there like Pluto’.

‘Gaga’ is an infant’s attempt at saying the word ‘water’.

‘Gargle’ is to bubble liquid in the mouth.

Scientists are speculating whether Pluto has a hidden ocean. A robotic spacecraft launched by Nasa is expected to reach Pluto in 2015. 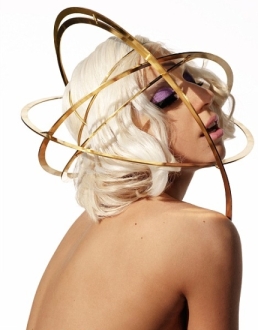 Ansar (or Anshar)was considered a primordial ‘god’ who’s mate was named kishar. He was the father of An (Anu) who in turn fathered En.Ki, En.Lil and Ninsarhag (Sister.)

Gaga was Ansar’s messenger, his emissary, his way to reach the galaxy. He sent gaga (sometimes called kaka 🙂 off to tell that Tiamat was going to be destroyed. Tiamat was (supposedly) in the orbital place that the Earth is in now. Part of her is now the Ea.rth. Tiamat’s consort Kingu, became the moon.

Gaga was also the ruler of ‘Pluto.’ Who was known (then) as a moon of Saturn. In her music video ‘Bad Romance” she is shown with the 5 rings of Saturn behind her head. A hint at her Pluto/Saturn connection?

The name Gaga or Kaka is an old Babylonian hermaphroditic deity. According to the book; The Religion of Babylonia and Assyria By Morris Jastrow, p.189