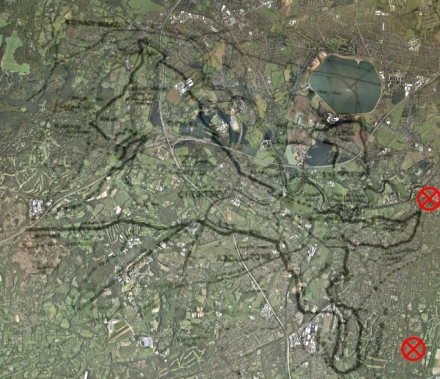 Cerberus the Guard Dog of the Kingston Zodiac

Maxwell Frank Clifford was born in Kingston upon Thames, Surrey in 1943. Interestingly, although he grew up poor, his family survived financially partly due to his sister working at the time as PA to the London vice president of the Morgan Trust Bank.

PR fixer Clifford, 69,  lives in a £3m mansion in Walton-on-Thames. The town of Walton is situated on the tail of Cerberus, the guard dog of the Kingston Zodiac.

Burwood Park itself is situated just off the hind leg of the dog. This is the gated community where the Clifford residence is located.

According to Clifford it’s a private gated estate with a golf course and a lake set in the grounds of one of the deer parks where Henry VIII would hunt with his dogs. Clifford also walks his dogs here. It’s fair to say that this is Clifford’s stomping ground. There are many people in Britain who would describe Max himself as a dog.

Clifford ticks all the right boxes to present himself as an upstanding member of society – visits to hospitals, children’s charity work including spin doctor for Children in Need, family man, friend of the stars etc. 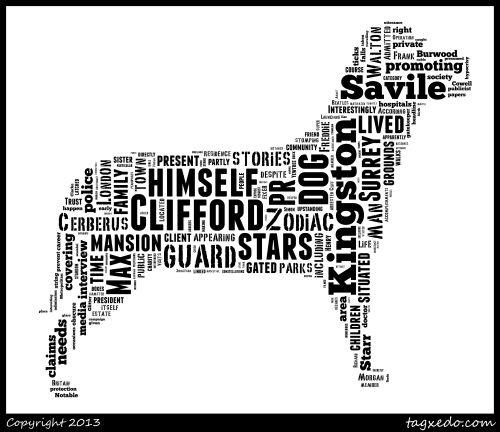 Notable accomplishments in his career include:

But Max sees himself more of a PR man than a publicist now. He has said that 80% of what he does is protection – to prevent stories appearing in the papers rather than making them happen. A gatekeeper, the guard-dog to the constellations of stars.

He has always been quick to distance himself from peadophiles and has stated on numerous occasions that he would never cover-up for child abusers. He claims to have helped expose Gary Glitter and Jonathan King. When asked what motivated him he said he could not stand hypocrisy in public life, and reserves a particular disgust for lying politicians. However, he appeared to contradict these claims in a secretly filmed interview where he admitted to knowing his client Alan Clarke ‘interferred’ with 2 under-age girls, what Clifford described as ‘slightly serious’. Whether his admission was after it was made public has not as yet been ascertained.

Few details of the exclusive interview he gave the Metropolitan Police have been given and once again despite what we may think of Clifford his innocence has to be presumed. Having said that, every utterance from his mouth needs to be taken with a bucketful of salt.

Amidst all the intrigue of the past few weeks, we are at present keeping an open mind as to whether Clifford is the guard dog to the false matrix of ‘stars’ and has been covering for them all along or whether he is the fierce yet noble defender of the Kingston Zodiac, the town of his birth-place, a vast star temple mapped onto the west London area and its outskirts which we hypothesise is how the ancient Britons laid out their dwellings and travelling routes.

It is interesting to note that many of the ‘stars’ caught up in the ‘Savile, Savile and Others and Others’ scandal live or have lived in and around this area too.

The problem that Clifford now faces as he finds he himself to be the story in the full glare of the media is that he has admitted to being a professional liar. Despite his obvious media savvy credentials this could prove a major stumbling block for him as he mounts the PR campaign of his life…for himself.