Dancing on the Brink of the World

Anders7777 aka Andrew Rowland passed away over Christmas of last year. A couple of months before he died he started a thread on the David Icke forum relaying the news that Jimmy Savile had been outed as a paedo. This referred to long-standing rumours finally breaching the defensive walls of the mainstream media and controlled public mind. Apparently he made several abortive attempts in the past. This time he caught the tide of the affairs of men.

It instantly became an internet sensation to date receiving over 5 million views, building to over 2500 pages and over 50,000 posts.

For the past few weeks our technicians have been processing and analysing a data-dump of the thread a member of the forum kindly provided when it was at 1882 pages.

Whilst the initial idea was to counter information overload by trying to provide a textual as well as graphical overview of a mega-thread that was soon becoming a monster that had become so large that the thread of the thread was in danger of being lost and collapsing under the weight of its own deluge of data, it soon became clear that not only were our technicians trying to understand the subject matter of the thread – we were also inspecting the inner workings of the hive-mind that evolved the thread over time.

Adding to the complexity is the fact that the mega-thread is not one solitary train of thought but is multi-threaded with several lines of inquiry branching into different directions yet posted sequentially on the thread.

So in order to find patterns in the ongoing chatter and attempt to tie these threads together in what had become an all-encompassing investigation that was delving into every dark corner of the land  as well as overseas from castles to seedy King’s Cross bedsits, to children’s homes in Jersey to the Outer Hebrides we decided to utilize the once novel but now dreaded word-cloud interface to display the raw text as this seemed an appropriate tool to try to make sense of over 4 million words in a 25MB text file.

Over the next few weeks we will be discussing the findings and presenting the data in various other forms of info-graphics. If this pilot project from our newly formed technical division is successful we will be exploring other data-sets and developing new tools to analyse and present the data to make it meaningful. 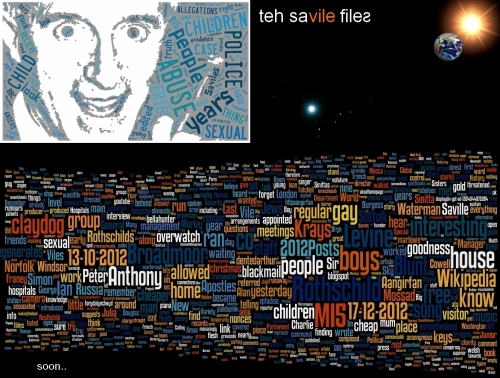 5 Comments to “Dancing on the Brink of the World”