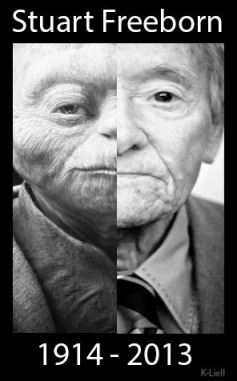 The legendary make-up artist Stuart Freeborn who was most famed for creating Yoda passed away this year at the age of 98.  He lived in Isleworth, west London with his wife Kay who passed away in 2012  and who was also a make-up artist and worked on The Empire Strikes Back and Return of the Jedi.

He based Yoda’s features on the eye wrinkles of Einstein and the ‘lumps and bumps’ of his own face. Considered a deity of the film industry, he also created Chewbacca, the Ewoks and Jabba the Hut as well as creating the images of Christopher Reeve’s Clark Kent and Superman. 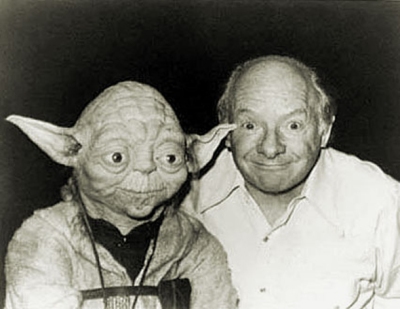 Yoda was a self-portrait by Stuart Freeborn

He worked with Stanley Kubrick on Dr Strangelove and 2001: Space Odyssey creating the make-up for the apes in the opening scene.

He designed the make-up of Alec Guiness’s Fagin in Oliver Twist who of course would go on to play Obi Wan Kenobi.

In 1935 he made a bold move. The Times newspaper received reports that Emperor Haile Selassie had been sighted driving in Beckenham. After political and public questioning on how a foreign dignitary could be in the UK unbeknown to authorities, the truth “leaked” out. The “Emperor” was in fact Stuart with nose, beard and make-up attached.

Unfortunately, rather than attaining the admiration that the work deserved, he was temporarily detained for questioning by the local police.

The 5ociety salutes ‘Yoda’ , the Master Freeborn of Isleworth as he joins Anakin and Old Ben in the Star Wars pantheon of immortals.

3 Comments to “Yoda of Isleworth”