The Voodoo Chile, the African Queen and the Parakeets of Twickenham 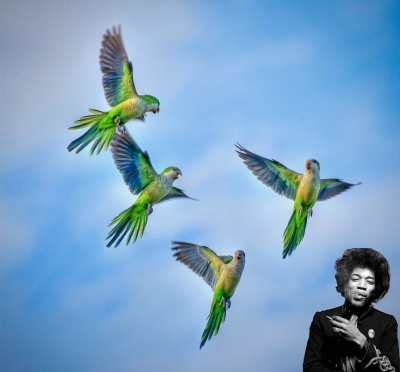 The sight and sound of exotic green birds in the west and south London area has become common-place in recent years.

It is thought that the origins of the flock, which now number in their tens of thousands, is attributable to a single pair of breeding parakeets that were released into the wild. 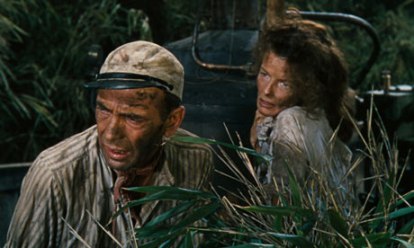 The jungle scenes from The African Queen were filmed @ Isleworth Studios

Some suggest they escaped from the set of The African Queen when filming took place at Isleworth Studios in 1951. 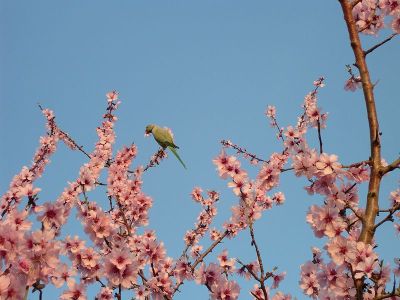 Another theory romantically attributes the ‘Voodoo Child’ Jimi Hendrix who it is said released them as a symbol of love in Carnaby Street in the Sixties.

Some people see them as a noisy unwanted alien pest that is displacing native British birds from their habitats through sonar dominance and weight of numbers. Others see them as an exotic and beautiful addition to our feathered fraternity of friends.

Fortean Times however thinks the truth of where they came from is more mundane:

Feral parrots have been recorded in London since 1855. A study by Oxford University biologists of the rose-ringed, or ring-necked, parakeet (Psitacula krameri), suggests that London’s parrot population may reach 100,000 by 2010, having grown from fewer than 500 in 1983. They are long-lived birds with no natural predators in Britain, and it’s feared they will become serious pests to agriculture and biodiversity. They are now found as far west as Wales and as far north as Glasgow. There are already more parakeets in London than there are nightingales. Their recent population explosion is perhaps explained by a warmer climate, and by the spread of garden bird-feeders. The likeliest explanation for their origins, say experts, is disappointingly mundane: they probably escaped, and were released, from aviaries, pet shops and private homes. Quick – close that window!

One Comment to “The Voodoo Chile, the African Queen and the Parakeets of Twickenham”