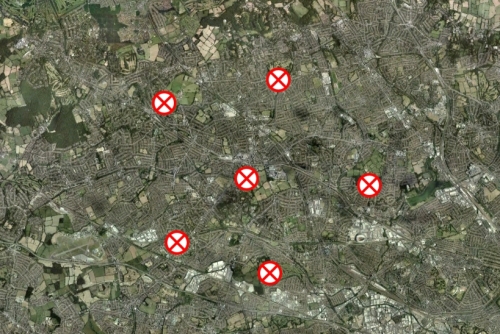 According to Christ Street of earthstars.co.uk

“London’s ley lines are not just simple straight alignments. Many of our ancient sacred sites are located in precise and complex geometric patterns on the landscape. When I first began to investigate this phenomenon in the early 1980s, I found a vast and beautiful network of sacred geometry linking many of London’s ancient sacred sites. It covered  the whole of Greater London and extended to linkup with other similar places the length and breadth of the land.

Most of the patterns are star-shaped, so the name Earthstars came naturally.

Earthstars can be understood in many ways. As a vast landscape temple.

As a construction of the spirit of the land, or in the case of London, the soul of the city.

As an aspect of the universal and planetary life-force, the web of life, which invisibly connects and binds all things.

As a protective spiritual aura over our Capital and other places where they are found.

Ultimately, I believe the specific geometry of London’s Earthstars (and the sites which define them) form a vast stargate, through which a transformative evolutionary force will affect our planet.

Obviously, this could only happen when certain planetary and stellar alignments occur. What they might be is open to debate.

Astrologers amongst you will know that the galactic centre will be focussed on London from 2012 and will remain there for the next fifty years.”

The Harrow Pentagram is not far from the Heathrow Airport Hexagram which is a patented airport runway design known as the ‘Star of David’ and is not thought to be based on leylines yet also forms a geometric shape on the landscape.