The Dark Pyramids of Amerika: The Luxor Hotel and the black cubes of Saturn 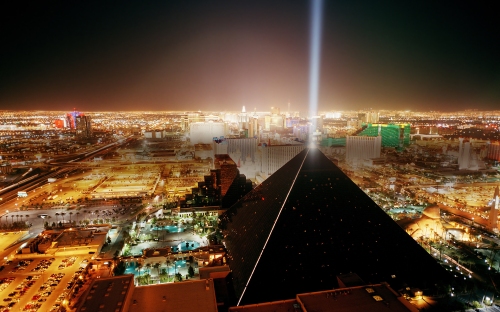 The Luxor Hotel complex in Las Vegas is ancient Egypt with a liquor license and stake money.

The Great Pyramid of Giza had a smooth limestone surface that would have dazzled in the African sun as a brilliant white. It is also missing its golden capstone.

The dark pyramid of Las Vegas has a black surface and an illuminated capstone that sometimes shoots an artificial beam of light into the sky at night-time.

Somewhere in his voluminous work, Manly P Hall observed that all the great structural achievements of antiquity were either left unfinished or deliberately scarred so as to remind the builders that the Great Work of the Ages was a work in progress and like mankind’s spiritual advancement was not yet completed

The builders of The Luxor Hotel thought they wouldn’t muck around. The pyramid took just a few years to erect and when it was complete its capstone was also added. Rather than precision align the pyramid to the stars and harness stellar energy flows, a spotlight does the job just as well albeit it’s just an illusion.

A huge advert for Absolut vodka can be seen draped over it in the photo below.

Inside the pyramid can be found a fake city that contains a casino. Casinos are essentially pseudo-random number generators with enough checks to ensure the house always wins. They harvest negative energy, both emotional and monetary and turn it into food. They continually instill a sense of luck and guesswork and a ‘get rich quick’ mindset as opposed to assured reasoning and hard work.

To our way of thinking, the appearance of the Luxor complex in the barren desert of Las Vegas isn’t so much a manifestation of the ancient Egyptian mystery schools  in America but more an in your face and obvious parody on how far man has fallen since then.

The vodka advert on the outside and casino in the inside is stark testimony.

It says: ‘we’re going to paint our pyramids black, and use them for casinos and saloons and plaster advertising for alcohol all over it. We’re also going to mount a phoney energy portal on the top of it that shoots a spotlight into the air.

None of it is real, it’s all fake, as illusory as a mirage. Casinos thrive on hyper-reality to fool gamblers into thinking the money they are losing isn’t real either, especially if it is transferred for kindergarten currency with big blue and red chips.

Las Vegas means ‘The Meadows’ in Spanish. Vega is also the second brightest star in the northern hemisphere and derives from Arabic (Al Nasr) al Waqi translated variously as “the eagle of the desert” or “the falling vulture.”

All of Las Vegas is hyper-real. The misery for an endless stream of gamblers is that this mirage is only too real. 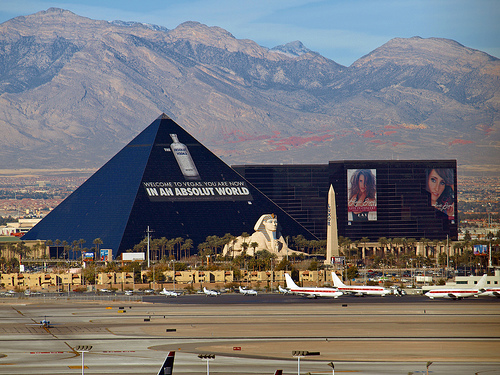 Perhaps the appearance of two ‘kaabaesque’ buildings with larger-than-life mannequins adorning their entire height next to the Luxor complex gives an indication as to the ideas behind it?

7 Comments to “The Dark Pyramids of Amerika: The Luxor Hotel and the black cubes of Saturn”