Dr Savile, the Devil’s Highway and the human battery farm of Broadmoor

Shortly after the ‘Savile Spell’ was broken it transpired that the 5ociety’s old friend Kenneth Clarke was the minister responsible for handing the keys to Broadmoor to Dr Savile FRCR (Hon). When questioned he claimed not to recollect his decision. 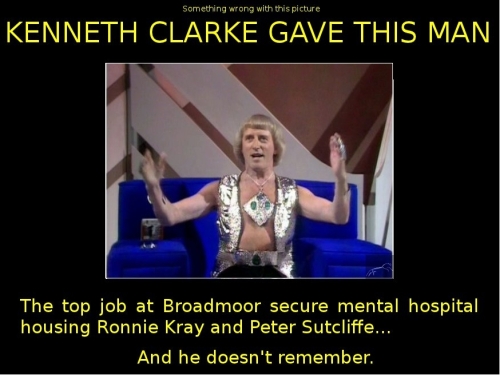 Why is it that these politicians who think they know it all, when you ask them a question it turns out they know nothing?

The Devil’s Highway is a continuation of the A30 leyline aka ‘The Hidden Unity’ due to a multiplicity of faiths erecting temples and churches on the ley.  The road is known by this name all the way to Silchester which is the terminus of the ley.

Was Broadmoor Hospital deliberately situated on this important ley to influence the telluric energies with negativity and would this explain the diabolical name of the highway that runs straight past it?

When a convict, such as Ronnie Kray or Peter Sutcliffe is charged and found guilty they are placed in a cell.  Sometimes they are used as slave labour. If they are old mates with the prison governor then they may get special treatment. Are these ‘cathedrals of criminality’ such as Broadmoor, run by criminal masterminds such as Dr Savile, some kind of cells composed of battery cells that are harvesting the prison atmosphere which in turn affects the flow of earth energies along the meridians?

We will be discussing this question and other intriguing features of the A30 leyline in subsequent posts. In the meantime, if you have any pertinent information or comments please feel free to post them below.

One Comment to “Dr Savile, the Devil’s Highway and the human battery farm of Broadmoor”