Herschel, Slough and the discovery of Mimas

Frederick William Herschel was the first man to discover Mimas, a moon of Saturn.

Although he also wrote 24 sympthonies and other musical work, his telescope became the talk of the town attracting royalty to Observatory House, his home in Slough.

He also made the discovery of the planet Uranus, along with two of its major moons (Titania and Oberon), and also discovered another of Saturn’s moons – Enceladus. In addition, he was the first person to discover the existence of infra-red radiation.

On 1 March 1774 he began an astronomical journal by noting his observations of Saturn’s rings and the Great Orion Nebula (M 42).

From 1782 to 1802, Herschel conducted systematic surveys in search of “deep sky” or nonstellar objects

The Moonwalk of the Callanish Stones

The Callanish Stones are situated near the village of Callanish on the west coast of Lewis in the Outer Hebrides.

It is probable that Callanish (or Calanais) – which comprises two other stone circles in addition to the main site – was built some 5,000 years ago as a lunar calendar. The path of the moon, unlike the reliably annual tracks of the sun, only returns to the same point once every 18.6 years. Callanish plots this slow progress, building to a crescendo in the 19th year at the lunar standstill – when the path of the moon is so low that it seems to walk along the horizon before setting within the stone circle.

Callanish’s mystery to the expectant crowd is not merely in the stones, but in their setting within a sacred landscape. To the south-west of the stones is a low, undulating hill known to the local people in Gaelic as Cailleach na Mointeach – the old woman of the moors, or Sleeping Beauty as she is more affectionately known. The contours look irresistibly like a reclining woman. At the lunar standstill the moon rises from behind this hill, tip-toes across her supine body and sets four hours later behind the Clisham, another sacred hill.

This moonwalk will happen throughout the summer once a month until September, and will draw hundreds for a number of reasons. Some people come to worship the full moon, others to witness the goddess walking the earth. All come in expectation of a spiritual experience and to feel the energy of the planet.
From Canadiancontent.net

Analemma: the Sky-walk of Solaris

This is what the sun’s annual pilgrimage across the heavens looks like.

In astronomy, an analemma from Greek ἀνάλημμα “pedestal of a sundial”) is a curve representing the changing angular offset of a celestial body (usually the Sun) from its mean position on the celestial sphere as viewed from another celestial body (usually the Earth). The term is used when the observed body appears, as seen from the viewing body, to move in a way that is repeated at regular intervals, such as once a year or once a day. The analemma is then a closed curve, which does not change.

Because of the Earth’s annual revolution around the Sun in an orbit that is elliptical and tilted relative to the plane of the equator, an observer at a fixed point on the Earth sees the Sun appear to move in an analemma around a mean position, taking a year to do so. The mean position appears to revolve around the Earth once every mean solar day, because of the Earth’s rotation. This daily revolution is not considered to be averaged out to get the mean. The mean position of the Sun is therefore at the same place in the sky at the same time every day, but not at other times.

Therefore if the observed position of the Sun in the sky is plotted or photographed at the same time every day, or every few days, for a year, the points trace out the analemma.

The Analemma and the Temple of Olympian Zeus Credit & Copyright: Anthony Ayiomamitis

See scienceblogs.com’s article for an in depth scientific explanation of this sublime sacred geometry movement hidden from our perception by time but bought into view by photography and patience. All you need to do is photograph the same spot at the same time over the course of a year.

Sign the petition below to stop Glasgow council scrapping the Sighthill Stones, the first meaningful stone circle to have been constructed in the modern age, by the Scottish Astronomer Duncan Lunan.

In 1973 Duncan Lunan reported to the British Interplanetary Society that he had identified and deciphered a hidden radio message sent by an alien space probe, caught but overlooked in the late 1920s by a collaboration of Norwegian and Dutch researchers. Lunan maintained that the putative message came from an object at the L5 point in the same orbit as the Moon, sent by the inhabitants of a planet orbiting Epsilon Boötis.

He concluded the message was “Start here. Our home is Upsilon Bootes, which is a double star. We live on the sixth planet of seven, coming from the sun, which is the larger of the two. Our sixth planet has one moon. Our fourth planet has three. Our first and third planets each have one. Our probe is in the position of Arcturus, known in our maps.”

By the 17th century the region had become a haven for artists, philosophers, mystics and kings. They settled here, inspired by romantic vistas and the promise of a cultured, disease free life. A century later their King erected a Meridian down the centre of the River Thames. Curiously, it appears to have been positioned in such a way as to commemorate the rivers most sacred landmarks, symbolically intersecting them, joining them together in a sacred landscape they called Arcadia. 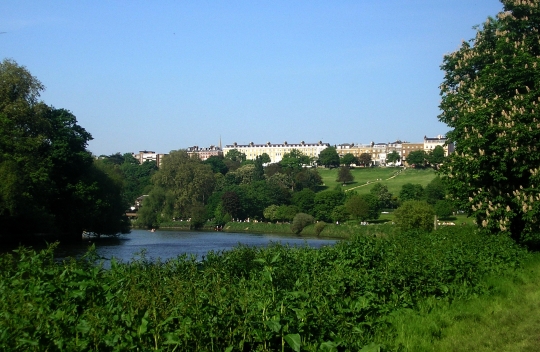 “Trams and dusty trees.
Highbury bore me. Richmond and Kew
Undid me. By Richmond I raised my knees
Supine on the floor of a narrow canoe.”
The Wasteland, T.S Eliot 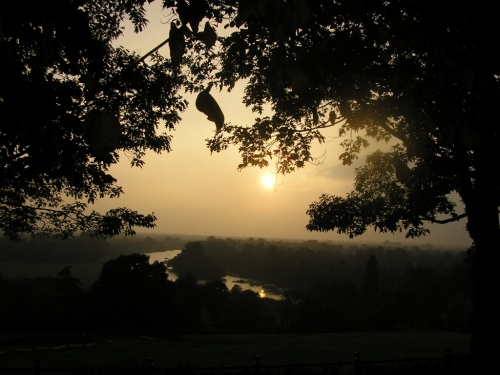 According to NASA  ‘Voyager 1 and 2 spacecraft imaged the (hexagon) feature over two decades ago.’

Bryn Celli Ddu – The Mound in the Dark Grove

Another neolithic treasure from Anglesey, Wales, dated to around 4000 years ago. 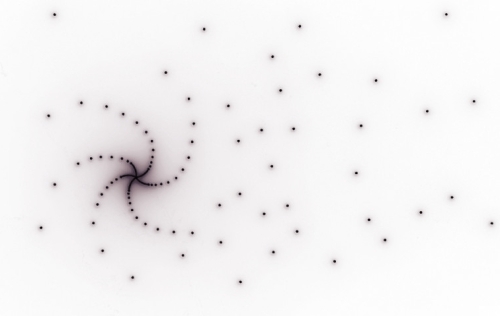 According to Jiro Olcott if you were given a ruler and a map (or better still Google Earth) and asked to draw the longest line in Britain without crossing water you will end up with a track that stretches from the tip of Lands End to the Norfolk coast near the town of Hopton.

This old straight track is known as the St Michael and St Mary line.

Olcott goes on to say

Coincidentally this also happens to be the exact axis along which the May Day sun rises over Britain.

This is not the only astronomical coincidence. The distance from coast to coast between these two end-points of Lands End and Hopton measures 365.24 miles precisely.

Stone circles, abbeys, tors, mounts, churches, man-made mounds, castles, holy wells and henges have been situated all along these currents. Academia would dismiss this holographic cryptogram as a mere sequence of happy coincidences or simply irrelevant. 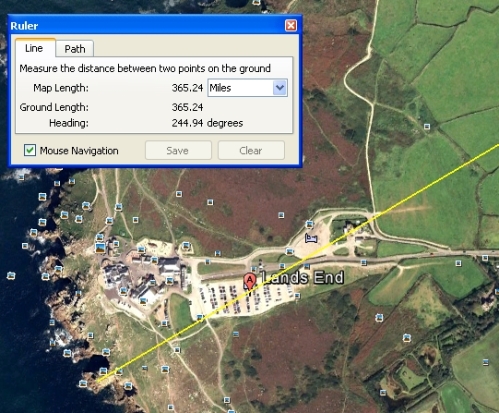 It is 365.00 miles precisely to the circular grass entrance to Lands End that is marked with stones.

If the creative force of the universe is able to create the universe perhaps it can intelligently design the dimensions of an island, the undulations of the land or the flow of a river any way it so pleases.

This sacred geometry artwork is the motion of Venus from our perspective on Earth.