New Space Transporter on the Horizon?

A ‘curious’ news story regarding radiation tests Curiosity carried out on its way to Mars emerged this evening. Is this a priming event for a forthcoming space-tech announcement?

“The situation would be greatly improved if we could only get there quite a bit faster,” Dr Zeitlin told BBC News.

“It is not just the dose rate that is the problem; it is the number of days that one accumulates that dose that drives the total towards or beyond the career limits. Improved propulsion would really be the ticket if someone could make that work.”

New types of propulsion, such as plasma and nuclear thermal rockets, are in development. These could bring the journey time down to a number of weeks.’

Sign the petition below to stop Glasgow council scrapping the Sighthill Stones, the first meaningful stone circle to have been constructed in the modern age, by the Scottish Astronomer Duncan Lunan.

In 1973 Duncan Lunan reported to the British Interplanetary Society that he had identified and deciphered a hidden radio message sent by an alien space probe, caught but overlooked in the late 1920s by a collaboration of Norwegian and Dutch researchers. Lunan maintained that the putative message came from an object at the L5 point in the same orbit as the Moon, sent by the inhabitants of a planet orbiting Epsilon Boötis.

He concluded the message was “Start here. Our home is Upsilon Bootes, which is a double star. We live on the sixth planet of seven, coming from the sun, which is the larger of the two. Our sixth planet has one moon. Our fourth planet has three. Our first and third planets each have one. Our probe is in the position of Arcturus, known in our maps.”

The Flying Saucer Working Party unclassified documents are part of the latest tranche of UFO related documents that the MOD has released through the National Archives to the public in the July 2012 data-dump.

Among other things, the document reveals the existence of a British X-Files composed of agents from various military intelligence agencies.

THE CHAIRMAN said that Sir Henry Tizard felt that reports of flying saucers ought not to be dismissed without some investigation and he had, therefore, agreed that a small D.S.I./J.T.I.C. Working Party should be set up under the chairmanship of Mr. Turney to investigate future reports.

This happened  in 1950, 3 years after Roswell.  Sir Henry Tizard was a radar scientist and the MOD’s Chief Scientific Advisor and according to Nick Pope he wanted to conduct a scientific inquiry into the UFO phenomenon.

After discussion it was agreed that the membership of the Working Party should comprise representatives of DSI1, ADNI(Tech), MI10 and ADI(Tech). It was also agreed that it would probably be necessary at some time to consult the Meteorological Department and ORS Fighter Command but that these two bodies should not at present be asked to nominate representatives”.

This last point is an illustration of how the UFO Cover-up is compartmentalised, not just internally and on an individual employee basis but on an organisational scale.

‘People from across the UK have reported seeing bright objects in the night sky, thought to be meteors or “space junk”

Some speculate it’s a pop-up meteor shower, some that its a piece of space debris, all of which is apparently charted and monitored by NASA. One observer described it as ‘an unidentified object’, obviously cautious of using the word ‘flying’ in between those two. We wonder, what else could it be moving slowly across the heavens, and are we just being fed whatever excuse is the most probable, rather than the truth?

I see the royal astronomers have already been summoned to run with the mundane explanation  (from 1:00)

Why is it so many small-minded people who seemingly have no interest in the wonders of the cosmos work as astronomers? 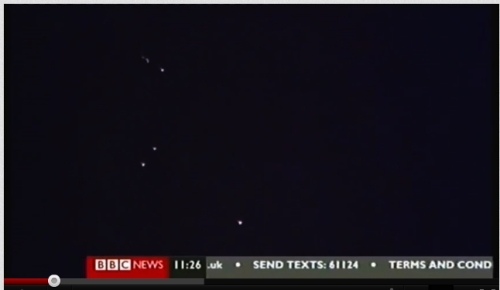 From around the Interwebz

This must surely be classed as an alignment?

The researcher Ian R Crane has recently ramped up his campaign to expose the Illuminati/NWO hijacking of the London 2012 Olympics. We are interested to see where this is going to end, as the date of the unfolding is rapidly approaching. Not only is time itself speeding up, but the rate at which conspiracies can be generated also appears to be on the increase. Im sorry we cant provide a textual taster on this blog, as it looks like Ian would rather you ingest the hypothesis visually, or at least aurally (there is no breakdown of it on his site).

And if the proposed event doesnt happen? we guess there is always the next time…

Its worth a listen/watch anyway.

THE TREASURE HUNTERS, OCEAN X TEAM, DISCOVERED SOMETHING UNIQUE WHEN THEY DOVE DOWN TO THE MYSTERIOUS CIRCLE-SHAPED OBJECT IN THE BALTIC SEA

Treasure hunters confirm they have found something abnormal in the seabed

The Ocean X Team dove down to the circle-shaped object in the Baltic Sea and met something they never experienced before. First they thought it was just stone or a rock cliff, but after further observations the object appeared more as a huge mushroom, rising 3-4 meters/10-13 feet from the seabed, with rounded sides and rugged edges. The object had an egg shaped hole leading into it from the top, as an opening. On top of the object they also found strange stone circle formations, almost looking like small fireplaces. The stones were covered in something resembling soot.

“During my 20-year diving career, including 6000 dives, I have never seen anything like this. Normally stones don’t burn. I can’t explain what we saw, and I went down there to answer questions, but I came up with even more questions “, says Stefan Hogeborn, one of the divers at Ocean X Team.

The path to the object itself can be described as a runway or a downhill path that is flattened at the seabed with the object at the end of it.

“First we thought this was only stone, but this is something else. And since no volcanic activity has ever been reported in the Baltic Sea the find becomes even stranger. As laymen we can only speculate how this is made by nature, but this is the strangest thing I have ever experienced as a professional diver“, continues Peter Lindberg, one of the founder Ocean X Team.

Right now, scientists are examining samples from the circle-shaped object, and experts in sonar imaging are processing data from the ship to hopefully shed more light over the mysterious object.

Let’s take, for instance, Indrid Cold: the name of the unearthly figure haunting West Virginia in the mid-60s during the Mothman flap. “Indrid Cold” has a numerical value of 112, which resolves in the “English Qaballa” to “We are one.” Greenfield notes in his Secret Cipher of the UFOnauts that Keel, author of The Mothman Prophecies, writing before the cipher was broken and the value of Cold’s name was discovered, observed that “We are one” was a “touchstone for a thousand New Age contact cults in the 1960s and 1970s.”

taken from the amazing –

UFOs and Extraterrestrials in Art History